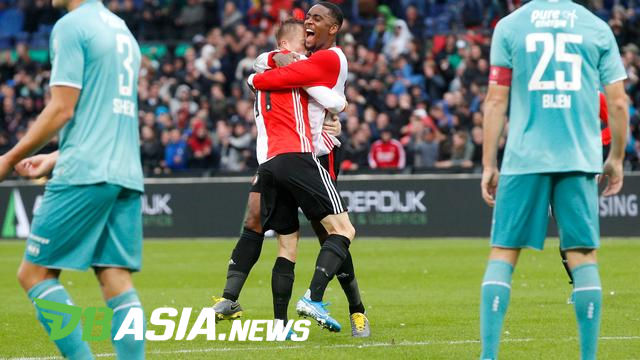 DBasia.news –  In the eighth match of the Dutch League last Sunday (29/9), Feyenoord managed to win over FC Twente by a score of 5-1 at De Kuip Stadium, Rotterdam.

The victory brought Feyenoord back to their winning ways after suffering his first defeat against AZ Alkmaar in a midweek match.

The victory lifted Feyenoord’s position in the standings to sixth with a collection of 13 points, including jumping over Twente (12) who dropped to 12th.

Wanting to vent their frustration over the defeat in the previous match, Feyenoord appeared opressingly since the beginning and even took only six minutes to open the scoring through Steven Berghuis when he completed the feed sent by Rick Karsdorp.

Twente gave resistance to the host and had an equalizer in the 23rd minute through Aitor Cantalapiedra’s goal, but three minutes later Sam Larsson returned to bring Feyenoord the lead through long range shots.

Feyenoord’s advantage lasted until halftime and they continued to master the course of the second round match until success increased the advantage to 3-1 when Larsson’s action ended in an own goal by Peet Bijen.

Unsatisfied with the two-goal lead, Luis Sinisterra scored Feyenoord’s fourth goal in the match as he snatched a wild ball from Renato Tapia’s shot which was not anticipated perfectly by goalkeeper, Joel Drommel, in the 67th minute.

The three points already in Feyenoord’s grasp were perfect when Larsson scored their second goal, a Drommel blunder.

Drommel attempted a sweep, however, the kick shot had struck Larsson and instead bounced into their own net in the 88th minute.

The victory was also an important capital for Feyenoord who will host Portuguese giants, FC Porto, in the continuing Europa League in the middle of next week.