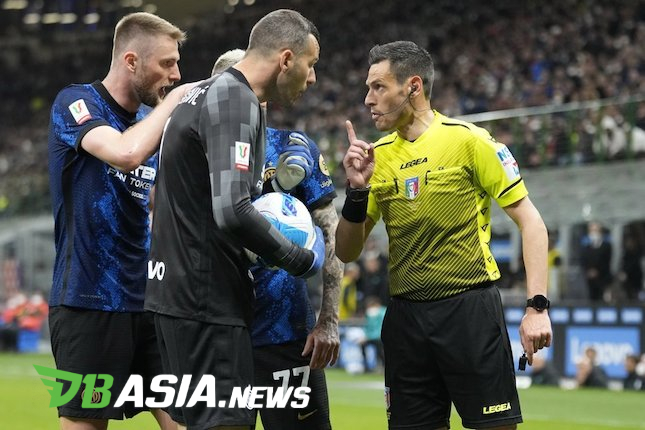 DBasia.news – AC Milan captain, Davide Calabria questioned referee Maurizio Mariani’s decision to annull Ismael Bennacer’s goal. Moreover, the Inter Milan player did not complain about it being offside, but rather than a handball.

AC Milan lost to Inter Milan. Meeting in the second leg of the Coppa Italia 2021-2022, at the San Siro, the Rossoneri lost with a score of three goals without reply. Inter’s scorers were Lautaro Martinez (2) and Robin Gosens.

Milan had scored in the 66th minute when the score was still 2-0. Bennacer’s kick went into Samir Handanovic’s goal.

However, referee Maurizio Mariani annulled the goal after using VAR. He considered that there was no handball by Fikayo Tomori, but Pierre Kalulu was in an offside position and blocked Handanovic’s view.

Calabria felt, if the goal was approved, the game would have ran differently. However, he didn’t want to regret it for too long.

“We do feel angry because I don’t think there is such a big difference. We have to focus on the next game. Because we can feel sorry, but not for long. We have to get back on track immediately,” explained Calabria.

One thing that concerns Calabria is the ease with which Milan’s goal can be broken into. In fact, previously Milan had not conceded in seven consecutive matches.

“We have to be sharper. We created chances and should have finished well. We didn’t deserve to lose 3-0.”

“We are a team that defends together and attacks together. We create chances. So, we have to think positively and be more decisive in front of goal,” explained Calabria.

Now, Milan and Inter are again competing in the race for the Scudetto. Milan, who are on top of the standings and two points clear, will visit Lazio at the weekend, while Inter will host AS Roma.