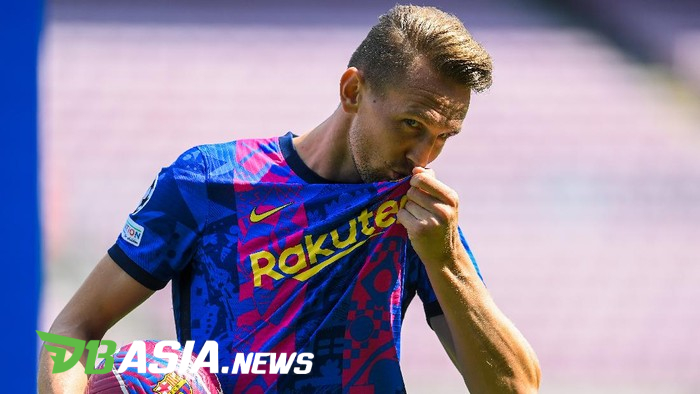 DBasia.news – FC Barcelona was in the spotlight throughout the 2021 summer transfer market. In addition to financial problems that limited their transfer maneuvers, the Blaugrana were also busy with the departure of Lionel Messi.

The 33-year-old megastar left Barcelona because his contract was not renewed. The rules in LaLiga regarding limiting club salaries and expenses are the reason. Barca transfer drama lasted until the deadline.

At the deadline of the summer transfer window, Barca loaned Antoine Griezmann to Atletico Madrid with a permanent purchase option (40 million euros). Instead, with a different transfer, Barca recruited Luuk de Jong from Sevilla.

Barcelona loaned him for a season and the arrival of the 31-year-old player was quite attention-grabbing. First, De Jong has never been on Barca’s target list and he is no longer young.

Barcelona’s front line is still full of players even though Messi and Griezmann have left. There are Martin Braithwaite, Depay, Ousmane Dembele, Aguero, Ansu Fati, Yusuf Demir, and now plus De Jong.

Slowly those who were injured such as Ansuf Fati, Aguero and Dembele are recovering. The presence of De Jong also adds to the quantity on the front lines of Barca. He came at the direct request of Ronald Koeman.

The Dutch Barcelona coach knows De Jong’s qualities from his time as coach of the Dutch national team in mid 2018-2020. In his career De Jong has scored 161 goals and provided 77 assists from 371 matches.

Despite the fact that his performance at Sevilla was not the best with a record of 19 goals from 94 matches, Koeman still asked for De Jong and that was the reason he joined Barcelona.

“He (De Jong) is a player I find interesting, he’s a goalscorer, who can head the ball, he will be good for us,” Barca president Joan Laporta said of De Jong on TV3.

“We also have Julio Salinas in the Dream Team. I spoke to Jordi Cruyff and he said ‘my dad sometimes has unusual solutions’.”

So what contribution can De Jong make for Barcelona? The player answered. The advantage is in the air ball duel.

“I’m different to the strikers here, I’m tall, good in the air. I know I won’t be playing every game, but I have a good relationship with Koeman.”

“He knows me from the national team and knows when he needs players who are high and good in the air at the end of the game.”

At 1.88 meters the former Newcastle United and PSV Eindhoven player is the fourth tallest player in the squad, behind Gerard Pique (1.94 meters), Neto (1.90 meters) and Sergio Busquets (1.89 meters).