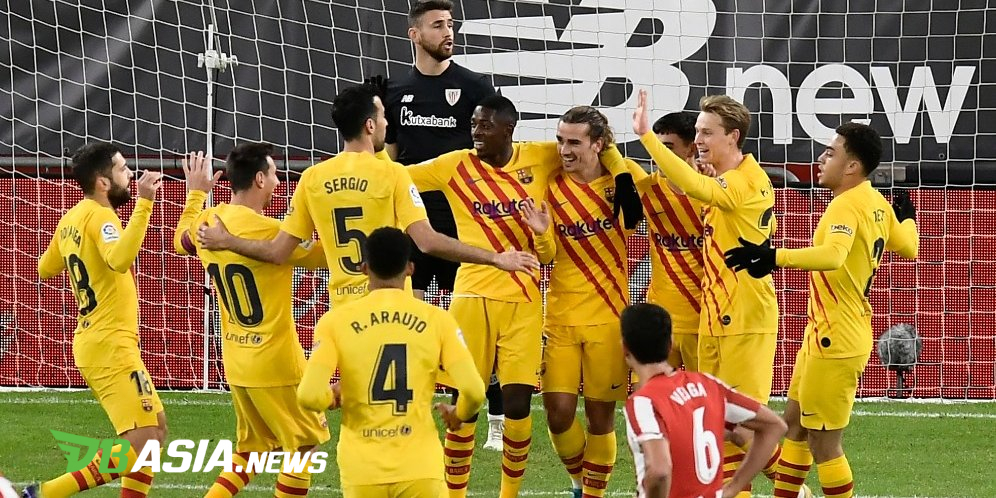 DBasia.news – Barcelona has proven that they are unworthy of being removed from the 2020-2021 LaLiga title race. Ronald Koeman’s team is now in third place after winning at Athletic Bilbao.

In a match that took place at San Mames, Thursday (7/1) am, WIB, Barcelona won by a narrow score of 3-2. This match is a means for the Blaugrana to show their winning mentality.

Barcelona started the match less smoothly. Their goal was immediately conceded when the game had been running for three minutes through Inaki Williams’ action.

However, this didn’t make the Barcelona players panic. Lionel Messi and his team mates were able to dominate the match and create a number of opportunities.

Barcelona’s attempt to equalize finally paid off in the 14th minute. Pedri’s header from Frenkie de Jong’s pass could was unable to be thwarted by Bilbao’s defense.

These goals has made the Barcelona players comfortable in playing. Messi then brought Barcelona back ahead in the 38th minute through a beautiful partnership with Pedri.

In the 62nd minute, Messi scored his second goal in this match. He took advantage of Griezmann’s bait to nest heavily in Bilbao’s goal.

But the Barcelona players’ mentality was put to the test in the dying minutes when Iker Muniain reduced the hosts to 2-3. The score has made Bilbao excited again to equalize.

Fortunately, Barcelona did not panic anticipating this situation. They were able to maintain their advantage until the match is over.

This victory was welcomed happily by Koeman. He considered Barcelona deserved three points because they played better than their opponent.

“I am happy with this result and the way we achieved it. We deserved it and the teamwork was phenomenal,” Koeman said after the match.

“We will fight until the last game. There is some distance (to go), but we are on the right track.”

Koeman also did not forget to give special credit to Messi and Pedri. Apart from scoring goals, both of them also made Barcelona’s front line very alive.

“Pedri showed that even though he is young, he is very mature. Messi has always shown his desire but today also with goals, it is very important,” he concluded.