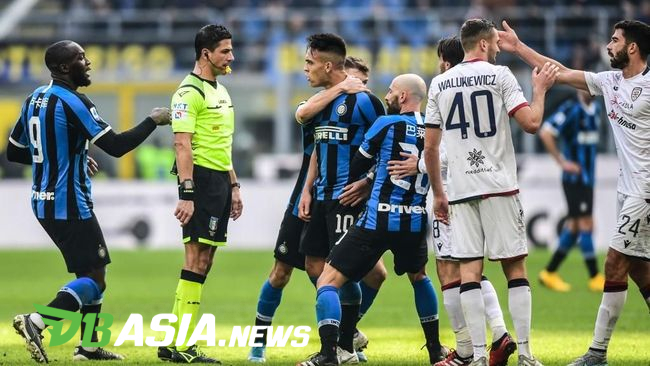 DBasia.news –  Inter Milan had to settle for a 1-1 draw at home to Cagliari in the Italian League continuing match at the Stadio Giuseppe Meazza, Sunday (1/26) local time.

The attacking had been created since the beginning of the match. Stefano Sensi and Giovanni Simeone threatened each other’s goal 10 minutes earlier.

Inter Milan who played before own supporters made a number of threats against the visitors. Unfortunately Romelu Lukaku’s header was wide and Lautaro Martinez’s strike was secured.

Only in the 29th minute Inter Milan opened the scoring. Starting from Ashley Young’s cross, Lautaro Martinez struck the ball with his header.

Being left behind by one goal has made Cagliari try to rise. Radja Nainggolan twice endangered his former team’s goal in the 36th and 37th minutes.

Lautaro Martinez almost scored his second goal four minutes before the first half ended. However, the score 1-0 for Inter Milan’s advantage lasted until the interval.

The first five minutes of the second half became a fighting ground for Inter Milan and Cagliari. Unfortunately both teams have not been able to break down their opponent’s goal.

Stefano Sensi twice had a chance to endanger Cagliari, although it hasn’t ended yet. Even so with Lautaro Martinez’s opportunity in the 60th minute through his right leg kick.

Cagliari broke the deadlock 12 minutes before the match ended. Receiving Joao Pedro’s ball, Radja Nainggolan listed his name on the scoreboard through a shot from outside the penalty box.

The 1-1 score lasted until the fight was over. These results has made Inter Milan be stuck in second place of the Serie A standings. However, Lazio who has savings of two games have the opportunity to overtake them.