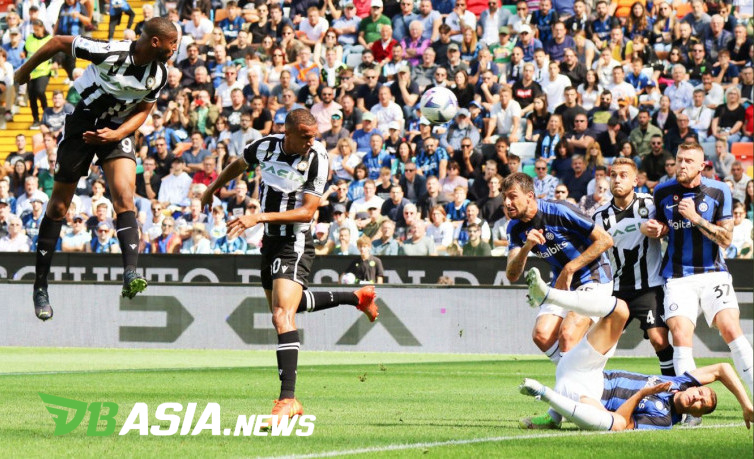 DBasia.news – Udinese has shown their status as the dark horse team of Serie A this season. Udinese won 3-1 and managed to climb to the top of the Serie A standings.

After winning twice in a row in all competitions against Torino and Viktoria Plzen, Inter Milan visited Udinese’s headquarters in week seven of Serie A. Simone Inzaghi’s rotation was again carried out in the Inter squad on the 3-5-2 tactic, Samir Handanovic, Henrikh Mkhitaryan, and Lautaro Martinez were starters.

Goals were created 5 minutes in. From a free kick near Udinese’s penalty box, Nicolo Barella scored a beautiful goal through a free kick without being able to anticipate Udinese goalkeeper, Marco Silvestri. 1-0 Inter on the lead.

Pressure after pressure for Udinese after being left behind paid off. Inter were stuck. Reply goals were created in the 22nd minute, again from free kicks and dead ball situations. This time a free kick from Roberto Pereyra was deflected by Inter defender Milan Skriniar, which ended in an own goal. 1-1 equal position.

Inter were not in control of the match and that disappointed Inzaghi. In the 31st minute he made two substitutions, bringing on Roberto Gagliardini and Federico Dimarco, replacing Mkhitaryan and Alessandro Bastoni.

The first half ended in a 1-1 draw. Inter had taken the lead, but Udinese’s constant pressure paid off. Inter could be overwhelmed in the second half if they don’t change the game as Udinese were diligent in pressing.

There were no significant changes in the second half, even though both coaches made substitutions. Udinese, playing for their fans, put up a fierce fight and relentlessly pressed against Inter.

When the game looked like it was going to end 1-1, drama suddenly broke out in the last 10 minutes. Udinese started the comeback with a second goal in the 84th minute and again from set pieces. This time, Gerard Deulofeu’s corner was met by Jaka Bijol with a header and scored a goal. 2-1 Udinese turned ahead.

Udinese’s comeback was even sweeter with the closing goal in the 90+3 minute. From the counter-attack, Deulofeu was again the creator of the attack and this time his cross was met by Tolgay Arslan who came in from the second line, which resulted in a goal. Udinese also won 3-1 over Inter and temporarily top the Serie A standings.