Kjell Scherpen Is the Tallest Goalkeeper in the Premier League 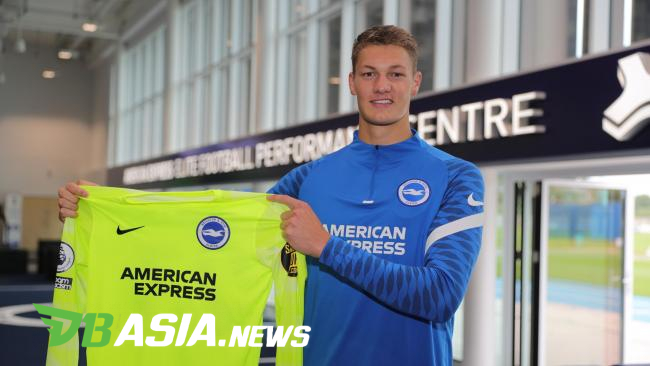 DBasia.news – Brighton and Hove Albion have officially signed goalkeeper from Ajax Amsterdam Kjell Scherpen. The Dutch goalkeeper immediately won the title of the tallest goalkeeper in the Premier League at this time.

The 21-year-old goalkeeper has played four times with Ajax in the 2020-2021 season. Now at Brighton Scherpen will compete with Robert Sanchez to become the main goalkeeper.

“We are delighted to welcome Kjell. He’s a player we’ve been following for a long time and we see him as a player with a lot of the right attributes,” said Brighton manager Graham Potter.

“Besides his stature, he is someone we think will work very hard to improve all aspects of his game as he adapts to English football,” added the manager.

At around 2.04 meters tall, Scharpen joins the list of tallest players to have appeared in the Premier League. His height is level with former Manchester City goalkeeper Costel Pantilimon and Ivory Coast striker Lacina Traore who used to play for Everton.

Scherpen has represented his country at Under-19 and Under-21 level and has been a target for Albion for some time as they look to have a capable back-up from Robert Sanchez. After the death of Mat Ryan last season who moved to Real Sociedad, Graham Potter needed a new goalkeeper.

Scherpen started his career with FC Emmen. He made his debut in the 2017-18 season, playing once as Emmen won promotion to the Eredivisie for the first time in history.

In his inaugural Eredivisie season with Emmen in 2018-19, Scherpen became first choice and played in 34 games. He broke the Dutch record as the young goalkeeper with the most appearances.

Scherpen changed clubs after ajax agreed to pay 1.3 million pounds. He signed a four-year contract with the Dutch giants. Ajax’s decision to sign Scherpen was controversial. The reason is that Scherpen has made a statement in support of Feyenoord, a rival that Ajax hates.

Inevitably Ajax supporters staged a campaign to stop the club from signing Scherpen. In the end the controversy subsided and Scherpen officially dressed as Ajax.

Scherpen spent 2019-20 behind Bruno Varela and Dominik Kotarski and did not register a single first-team appearance. In 2020-21, Scherpen was promoted to Ajax’s number two goalkeeper.

He had four times replaced Maarten Stekelenburg. He played twice in the Eredivisie, once in the Europa League and once in the Dutch Cup. He also played 29 times for Ajax U-21.

Kjell Scherpen Is the Tallest Goalkeeper in the Premier League