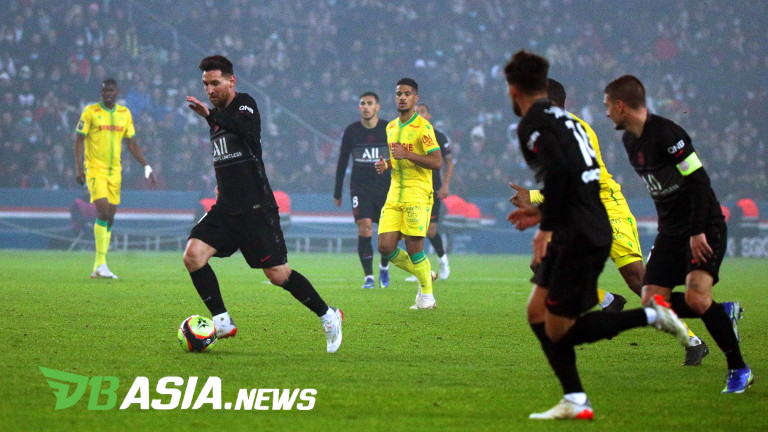 DBasia.news – Paris Saint-Germain successfully defeated Nantes 3-1 in Week 14 of the French League. Lionel Messi scored his first goal in Ligue 1 in this match.

Playing at the Parc des Princes, Saturday (11/20/2021), PSG was already ahead when the game was two minutes in. Leandro Paredes fired a long-range shot into Nantes’ goal, but Kylian Mbappe deflected the ball with his left foot, surpassing Nantes goalkeeper, Alban Lafont.

PSG almost added a goal in the 17th minute ha Lionel Messi’s right-footed shot was not blocked by Lafont. Likewise, Mbappe’s shot in the 22nd minute was also blocked by the 22-year-old goalkeeper.

PSG’s attack continued in the 29th minute, this time through a close-range shot from Neymar. Lafont continued to perform brilliantly by holding back the Brazilian striker’s chances. Messi’s left foot kick in the 38th minute was again countered by him.

Nantes’ shot on goal was only successful in the second half of injury time. Ludovic Blas tried his luck with a long-range effort, but Keylor Navas swiftly saved the net. The 1-0 score lasted until the break.

In the second half, Nantes tried to put pressure on from the start. There was a chance through Andrei Girotto in the 47th minute, but it was not on target. Meanwhile, Kalifa Coulibaly’s header in the 51st minute was easily anticipated by Navas.

Messi again had the opportunity in the 56th minute. He fired a low shot from distance, but Lafont continued to block it.

A red card in the 65th minute! Keylor Navas committed a professional foul to Ludovic Blas in front of the PSG penalty box, and the referee did not hesitate to send the Costa Rica goalkeeper off. Sergio Rico came in to replace him.

Nantes efforts finally paid off in the 76th minute. The crossing from Quentin Merlin was met by Randal Kolo Muani with a header, but was saved by Rico. The wild ball was again taken by Muani, and with his backheel successfully broke into the PSG goal.

In a 1-1 situation, Nantes appeared excitingly. But PSG have not given up, even managed to take the lead again in the 81st minute.

Starting from Messi who wanted to provide a breakthrough bait in front of the Nantes penalty box, Dennis Appiah tried to block the flow of the ball, but instead turned and entered the top right corner of Lafont’s goal. The hosts are back 2-1 up.

Nantes efforts to equalize were increasingly challenging fter Messi scored in the 87th minute. Through a counter-attack, Messi who received feedback from Mbappe was driven away by the visitors’ back row.

Messi stayed calm and fired a curling shot from the edge of the penalty box which was lodged in the left corner of Lafont’s goal. This became Messi’s first goal in the French League, while ensuring victory with a score of 3-1.

This result makes PSG increasingly at the top of the French League standings with 37 points. While Nantes is in 11th place with 18 points.