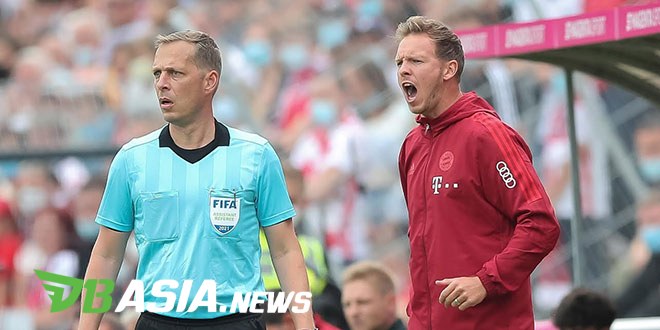 DBasia.news – Julian Nagelsmann had to mark his debut at Bayern Munich with a loss. Die Bavaria lost 2-3 to FC Koln in a friendly.

Bayern Munich underwent their first match under Julian Nagelsmann against FC Koln at the MS Technologie Arena in a test match, Saturday (17/7/2021). This duel also marked the debut of Dayot Upamecano who had just brought in Die Roten from RB Leipzig.

However, Bayern appeared without its pillars who played in the 2020 European Cup. This has made Die Bavaria play a lot of back-up players and young players in this match against Cologne.

Bayern was able to take the lead quickly when the game ran for six minutes. Eric Maxim Choupo-Moting’s pass was able to be completed by Armindo Sieb into a goal.

After being left behind, Cologne was able to rise. They were able to equalize through Jan Thielmann in the 20th minute. Steffen Baumgart’s team then took the lead seven minutes later from Mark Uth.

Bayern was able to force the first half with a 2-2 draw. This happened after Joshua Zirkzee broke into Timo Horn’s goal in the 34th minute.

After the break, Uth was able to score his second goal in this match in the 56th minute. The goal also ensured that Cologne won 3-2. Nagelsmann had to be willing to start his career with Bayern with a defeat.

After the match Nagelsmann assessed that his team should have deserved a draw in this duel. The reason, he considered Bayern capable of producing many opportunities.

However, Nagelsmann was not too disappointed with this result. This 33 year old player revealed that the match was interesting and there were many positive things that his team could learn.

“In terms of chances, a draw was deserved. We had good moments going forward, we scored well,” said Nagelsmann as quoted from Bayern’s website after the game.

“We had a few other chances. Overall, it was an entertaining friendly match. And in fact, the crowd there was also great. We can take something positive from this,” he added.