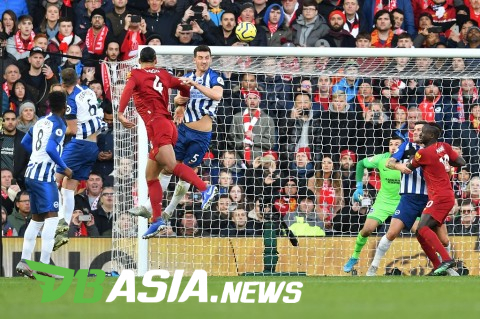 With this victory Liverpool equaled a record of 31 matches of being unbeaten in England’s highest caste competition recorded from May 1987 to March 1988. In addition, Liverpool have now recorded 14 consecutive home wins in the Premier League, the longest in their history. Not only that, Liverpool repeated the record of 31 undefeated league games at Anfield which had been carved in the 1987-88 season.

Liverpool made three changes from the squad that drew with Napoli in the middle of the week. Trent Alexander-Arnold, Gini Wijnaldum and Alex Oxalde-Chamberlain this time appeared to be a starter in place of Joe Gomez, James Milner, and Fabinho who were injured. While the Brighton camp made four changes compared to last week.

Liverpool immediately pressed the defense of Brighton since the duel began. In the first 15 minutes the Reds’ players pressed, but Brighton’s defense was still solidly restrained.

Opportunities were obtained by Liverpool in the 16th minute. Roberto Firmino fired hard against Brighton after receiving a pass from Sadio Mane. But Firmino ball was successfully blocked by Brighton goalkeeper, Mathew Ryan.

Liverpool finally can break down the visitors’ goal. Utilizing a free kick from Trent Alexander-Arnold, Virgil van Dijk successfully sent the ball into the goal with a header.

Six minutes later, Van Dijk continued to list his name on the scoreboard through the dead ball scheme. This time Van Dijk turned Alexander-Arnold’s corner kick into a goal.

Winning two goals, Liverpool continued to storm Brighton. At the end of the first half, Liverpool’s attack almost added to the advantage. But Alex Oxlade Chamberlain’s kick was muted by Ryan. Until the first half ended, the 2-0 score for the host did not change.

At the beginning of the second half, the rhythm of the game was not much different from the first half. In possession of the ball, both sides almost equaled.

In the 54th minute, Brighton had the opportunity to attenuate the position. However, Lewis Dunk’s header who were superior in an air duel with Dejan Lovren was slightly deviated.

Brighton re-created the opportunity on the 62nd minute. Luckily for the host, Aaron Connoly’s efforts was still able to be tamed by Alisson.

Three minutes later, Liverpool failed to exploit Liverpool’s golden opportunity. Chamberlain kicked the ball in the penalty box, which failed to become a goal after being blocked by Dunk.

In the 76th minute, disaster came to Liverpool when goalkeeper, Alisson, had to receive a red card for holding the ball outside of his lair. After a while, Brighton scored a goal following the ignorance of Liverpool’s back line to face Dunk’s free kick. The sore changed to 2-1.

Ten minutes later, Brighton, who had a superior number of players, received another chance. But the hard kick by Mooy was still able to be blocked by substitute goalkeeper, Adrian.

88 minutes in, Brighton continued to threatened bur failed to become a goal. Gross’s header was released from Andrian’s catch, but the keeper could still react to securing the ball.

Until the fight was over, Liverpool were able to maintain a 2-1 victory. These additional three points has still made Liverpool firmly at the top of the Premier League standings with 40 points. They are now 11 points ahead of defending champions, Manchester City, who sits second after being held to a 2-2 draw by Newcastle United.