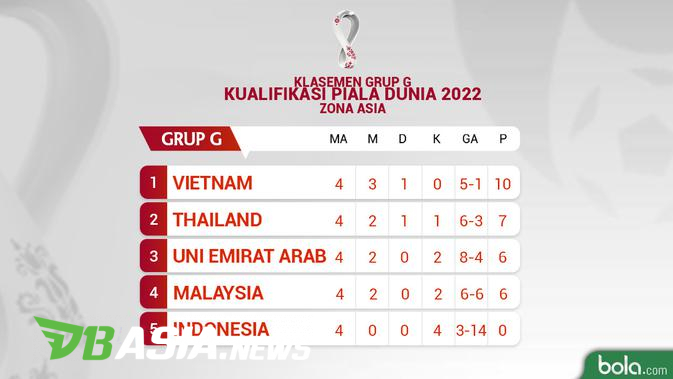 DBasia.news –  The qualification for Group G in the second round of the 2022 World Cup qualification in the Asian zone resumed on Thursday night (11/14/2019). There are four teams that strive to pursue victory on this fourth matchday.

Appearing at the My Dinh Stadium, Vietnam immediately troublesome UAE backline at the beginning of the match. The ferocity of Vietnam’s game made the UAE have to play with 10 players after Khalifa Al Hammadi got a red card in the 37th minute.

After halftime, the home team increasingly pressing the visitor’s defense. However, they failed to add to the coffers of his goal and the game ended with the score 1-0.

This victory along with the defeat of Thailand made Vietnam successfully mastered the top of Group G. Currently, Park Hang-seo’s squad has managed to collect 10 points from four party groups G. Winning three points from Thailand who inhabits the runner-up position.

Meanwhile, the UAE must be satisfied sitting in the top three standings with a collection of six points from seven matches. Only superior goal difference from Malaysia who occupies the fourth position. Meanwhile, Indonesia is still at the bottom of the standings after swallowing four successive defeats.