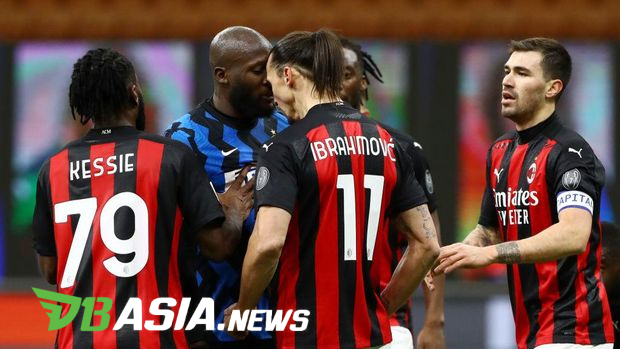 DBasia.news – Inter Milan has advanced to the Coppa Italia semifinals, after beating their city rivals, AC Milan 2-1 in the quarter-finals.

At the Giuseppe Meazza, Wednesday (27/1/2021), Zlatan Ibrahimovic gave Milan the lead in the 31st minute. But he was sent off in the 58th minute after receiving two yellow cards.

Milan immediately took the initiative to attack at the start of the match. Stefano Pioli’s team seemed to want to steal a fast goal.

Rafael Leao and Zlatan Ibrahimovic posed a serious threat to Inter’s goal. Unfortunately, both shots and headers were still unaccurate.

Slowly, Inter began to be able to balance Milan’s possession. Romelu Lukaku and his team mates had put the pressure back on.

Milan finally broke the deadlock in the 31st minute. Ibrahimovic’s foresight in placing the ball into the left corner of the goal stunned Samir Handanovic.

In the remainder of the first half, Inter tried to equalize. However, the score 1-0 for Milan’s excellence remained until halftime.

At the start of the second half, Inter increased their breaking force by bringing in Achraf Hakimi. This change made Antonio Conte’s team attack more.

It made Milan depressed. Ibrahimovic finally made a fatal mistake that resulted in a red card.

Ibrahimovic received a second yellow card in the 58th minute for violating Aleksandar Kolarov. Milan also had to play with ten people in the remaining time.

The advantage of the number of players has made Inter more free to attack Milan’s defense. Conte then brought in Lautaro Martinez to add another forward.

Inter’s efforts finally paid off in the 71st minute through Lukaku’s penalty. The prize was given by the referee after Nicolo Barella was brought down by Leao in the forbidden box.

The match was stopped in the 74th minute after referee Paolo Valeri suffered an injury. After receiving treatment, he was finally replaced by the substitute referee, Daniel Chiffi.

After the match resumed, Inter increasingly pressed Milan’s defense. Lautaro and Lukaku had a golden opportunity before normal time ended, although Tatarusanu still managed to defeat them.

The long injury time period was finally able to be used by Inter to score the winning goal. Christian Eriksen became a hero after his 97th minute free kick shot that went smoothly into Milan’s goal.

The 2-1 score for Inter’s victory finally lasted until the game was over. La Beneamata has the right to advance to the semifinals.