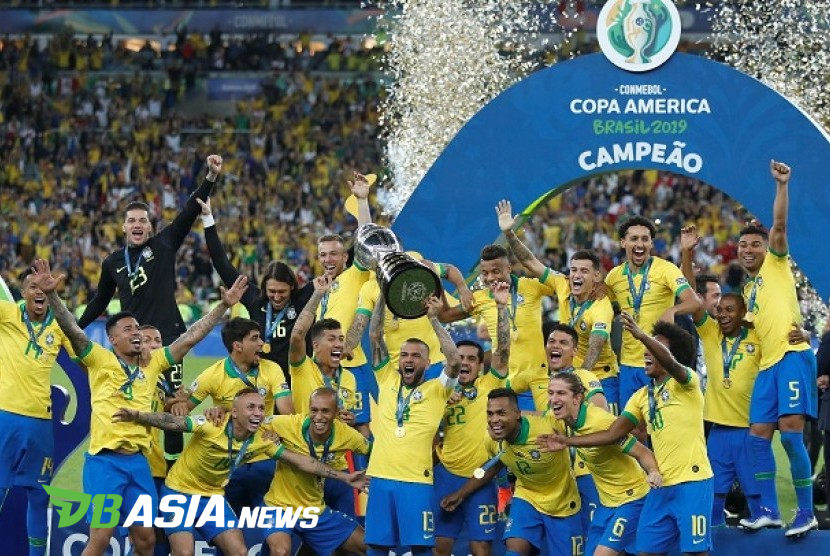 DBasia.news –  The Brazilian national team embraced the 2019 Copa America title when it successfully conquered Peru in the final which took place at the Estadio Maracana on Monday (8/7) early morning Western Indonesian Time. Brazil won with a landslide score 3-1.

Brazil directed by Tite played with a 4-2-3-1 tactic and relied on Roberto Firmino on the front lines supported by Gabriel Jesus, Philippe Coutinho, and Everton. Peru went down with the same tactics and relied on the veteran striker, Paulo Guerrero, as the spearhead.

Brazil played comfortably against the opponents they crushed 5-0 in the group phase. Brazil dominated possession by 55 percent, releasing 12 attempted kicks, and three on target. While Peru released seven kicks and two on target.

Only 15 minutes into the match, Everton Soares had scored when he received a cross from Gabriel Jesus. That momentum continued through Brazil’s second goal scored by Jesus right before the match in the first half.

But before the Manchester City striker’s goal was created, Peru had narrowed the gap through a penalty scored by Guerrero on 44 minutes. A penalty was awarded after VAR (Video of the Referee Assistant) saw a handball by Thiago Silva in the restricted area.

The first half ended with a 2-1 position for Brazilian superiority. Peru is not much troublesome for Brazil despite playing aggressively and trying to suppress the opponent so they are not free to control the ball.

In the second half, Tite played Richarlison, Eder Militao, and Allan. The course of action in the second half seemed relatively boring. Brazil, which has won 2-1, played safe to prevent Peru from counterattacking.

The drama took place in the 70th minute. Jesus received a second yellow card after breaking Carlos Zambrano and was sent off. While crying, Jesus left the field by kicking a drink bottle and pushing the VAR monitor.

Brazil remains dominant despite playing with 10 players. In fact, they closed the victory through a third goal scored by substitute Richarlison through the white spot after Zambrano broke Everton in the area of 16 meters.

Without mercy, the Everton striker converted a goal to Pedro Gallese. The position became 3-1 and lasted until the match broke up. Brazil, for the first time since 2007, won the 2019 Copa America title.