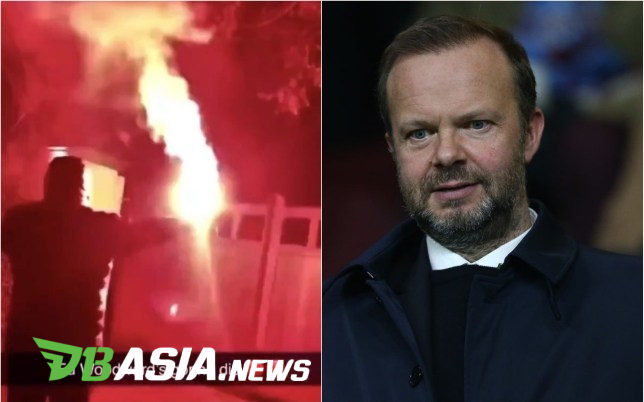 DBasia.news –  Manchester United reported one British media to the police related to the attack on the home of Man United CEO, Ed Woodward, some time ago. The media is The Sun. According to the Red Devils, The Sun had obtained information before the attack occurred.

On January 28, 2020, Woodward’s house was attacked by unscrupulous Man United fans. Besides throwing flares into the house, they also crossed the wall of the front gate of Woodward’s house and left messages threatening him.

The person allegedly disappointed over the sluggish Man United transfer with recruits who did not make a large contribution. Plus, the performance of Ole Gunnar Solskjaer’s team this season is not as inconsistent as it was last season.

Man United assesses that Sun has placed journalists and photographers, who are suspected of knowing the information of the attack, at Woodward’s house. They took a firm stand to report Sun to Ipso or the Media Watch Board.

“Manchester United has lodged an official complaint with the Independent Press Standards Organization (IPSO) regarding Sun’s newspaper and its coverage of the attack on the home of Deputy Chief Executive Ed Woodward,” United’s official statement said.

“The complaint is related to the story of ‘Ed Devils: Man Utd fans throwing flares at Ed Woodward’s house in a shocking scene when anti-directors protests continue to rise’ brought online and in the back pages of the print edition dated January 29, 2020.”

“The club believes that Sun has received prior notice of the intended attack, which includes criminal damage and intent to intimidate, and that journalists are present when it happens. The picture quality that accompanies the story shows that a photographer is also present. “

“Journalists not only fail to carry out the basic duties of members of the public who are responsible for reporting crimes that will occur and prevent potential danger and criminal damage; their presence encourages and rewards perpetrators. We believe this is a clear violation of Ipso’s editorial code and ethical journalism.”

“The decision to submit an official complaint to Ipso is not taken lightly. We will wait for his decision with great interest as an important test of the self-regulation system for newspapers and its ability to uphold ethical standards in the press.”

A spokesman for The Sun, quoted from the Guardian, will follow Ipso’s inspection procedures cooperatively. However, the spokesman also confirmed that Sun did not place photographers and journalists at Woodward’s house before the attack.

“We have been told tonight about a complaint to IPSO by Manchester United. Sun completely condemned the attack on Woodward’s home and was happy to cooperate fully with the police investigation, “said spokesman Sun.

“But The Sun, like all newspapers, actively defends his right to report. The following information that there will be protests attended by a Sun reporter. The Sun accurately reports events that occur.”

“There was never time for our reporters to find out what would happen or incite it or encourage any criminal activity. The article explained that the behavior was criminal and unacceptable. The Sun wholeheartedly supports the Editor’s Code of Ethics and will defend complaints to IPSO, “he concluded.