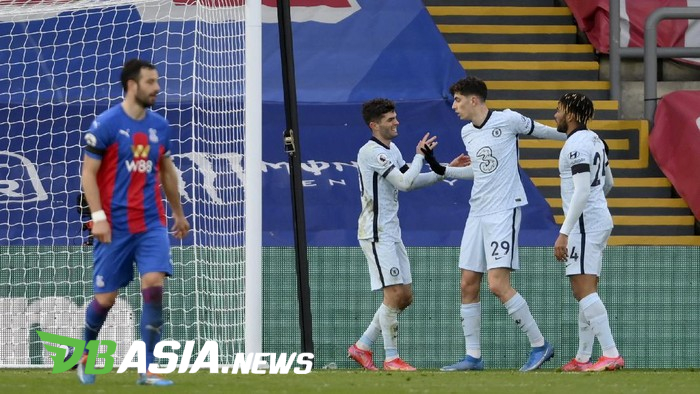 DBasia.news – The London derby in Week 31 of the Premier League between Crystal Palace and Chelsea at Selhurst Park, Saturday (10/04) evening WIB, ended for the Blues’ 4-1 victory. Chelsea is now back in the top four, aka the Champions League zone.

Chelsea started the match quickly on 3-4-3 tactics. Only eight minutes into the game, a goal was created by Kai Havertz. After the ball from Christian Pulisic’s opportunity was pushed over by Vicente Guaita, the ball rebounded by Havertz. Chelsea were 1-0 ahead.

Two minutes later Chelsea took advantage of the momentum and added to the lead. Through the neatly arranged attack, Kai Havertz’s assist ball ended for Pulisic’s goal. Chelsea away with a score of 2-0.

Chelsea’s goals continued until finally the third goal was created in the 30th minute. Chelsea defender Kurt Zouma also listed his name on the scoreboard after receiving a pass from Mount’s free kick. 3-0 for Chelsea, lasted until halftime.

Chelsea throughout the first half were very dominant and if Palace didn’t have Guaita in goal they could have conceded more goals. A difficult mission for Roy Hodgson to motivate Palace to make a comeback in this match.

Palace tried to reply in the second half. Hodgson played Jeffrey Schlupp and James McCarthy. The result on the 63 minute has made Christian Benteke narrow the gap when he headed Schlupp’s cross. 1-3 Palace scored.

Chelsea ‘killed’ the match in the 78th minute. Pulisic listed his name back on the scoreboard when Reece James grabbed a deflected cross. James entered to replace Callum Hudson-Odoi. 4-1 for Chelsea.

No more goals were scored until the game ended plus added time. Chelsea returned to their winning streak in the Premier League with a 4-1 result over Crystal Palace at the London Derby.