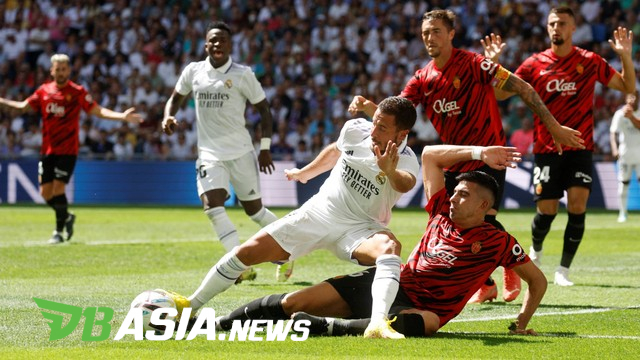 DBasia.news – Real Madrid managed to maintain their perfection in LaLiga after beating Mallorca 4-1 at the Santiago Bernabeu.

After being left behind, Los Blancos went on a rampage and scored four times against Los Piratas through contributions from Federico Valverde (45′), Vinicius Junior (72′), Rodrygo (88′) and Antonio Rudiger (90′).

Thanks to this victory, Carlo Ancelotti’s team were able to achieve maximum points (15) and snatched the top of the standings from arch-rivals Barcelona. They also managed to continue their positive trend despite the absence of the injured Karim Benzema.

Though favored, Real Madrid’s issue did not go away. Los Blancos fell behind in the 35th minute because of Vedat Muriqi’s header.

From the screeching scheme, the Kosovo striker was freed at the far post, and continued Lee Kang-in’s ball past Thibaut Courtois’ goal.

With this goal, Madrid has not been able to keep a clean sheet in the first five La Liga matches.

The first half appeared set to end 1-0 for Mallorca, but Fede Valverde broke it just seconds before the break.

After receiving Dani Ceballos’ pass in his own half, the Uruguay midfielder dribbled solo before cutting in from the right and firing a beautiful shot into the top corner of the visitors’ goal. His goal came at the perfect moment, Ancelotti breathed a sigh of relief!

Mallorca could actually have won again, but Antonio Sanchez failed to hit the ball into an empty net in the 65th minute.

Receiving Luka Modric’s pass, Rodrygo swerved past tackles and escorted the Mallorca defenders in the middle of the pitch before tucking a pass towards Vinicius in front of the penalty box. With a great first touch, the Brazilian winger found space and his left foot shot gracefully past Predrag Rajkovic, Madrid ahead by 2-1.

This goal made Vinicius Junior (22 years 61 days) the youngest player to score in four consecutive La Liga matches since Gonzalo Higuain (21 years 346 days) last November 2009. He has also scored in five consecutive games across competitions for Madrid this season.

Rodrygo continued to show results for Madrid, by defeating the ‘victims’ of several Mallorca defenders in the process. However, this time he finished it himself in the 88th minute to double the Blancos advantage.

Madrid was on a roll, and Antonio Rudiger sealed the score 4-1 in the 90+3 minute after finishing Toni Kroos’ pass from a squeaker. The former Chelsea defender was actually offside in the replay, but VAR did not annull it.