Real Madrid objects to being Defeated by Levante 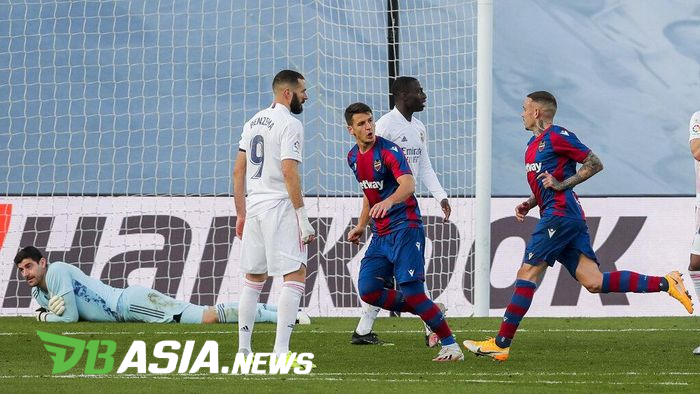 DBasia.news – Real Madrid surprisingly had to be defeated 1-2 when they hosted Levante in the continued 2020-2021 LaLiga, Saturday (30/1). Los Blancos objected to accept the defeat.

Madrid were unlucky when they hae to play with ten players since the ninth minute. Eder Militao was given a red card after blocking Sergio Leon’s chance to score.

However, the difficult conditions did not make Madrid broken. It was proven that Zinedine Zidane’s team was able to excel four minutes after Eder’s red card incident.

Levante, who was superior in number of players, was slowly able to take over the game and reversed the position of the goals in the 32nd minute through Jose Luis Morales (32 ‘) and Roger (78’).

Madrid could have even lost badly if Roger’s penalty execution in the 64th minute had resulted in a goal. Luckily, Thibaut Courtois was able to read the direction of the shot and ward off the ball with one hand.

“This is a defeat that is difficult to accept, especially after the 9th minute it has been a really tough fight. We scored a good goal and then the equalizer from Levante took us hard, “said Madrid assistant coach, David Bettoni after the match.

“We started the second half well, we continued to press and showed real character. We had two chances and then their second goal arrived.”

Even so, Bettoni praised the mentality of his players. He felt that Madrid had performed optimally after losing one person for most of the match.

“It was a painful defeat but I saw a team with a great attitude and personality. The team was disappointed in the locker room but they are hungry to keep fighting until the end,” he added.

I saw Real Madrid full of character, full of pride. We weren’t able to win this match in the second half, that’s all. “

Bettoni was also reluctant to comment on a number of refereeing decisions that were detrimental to Madrid. Apart from Eder’s red card, the penalty for Levante, which ultimately failed to convert into a goal, also invited debate.

What is clear is that this defeat has made Madrid fail to keep a distance from Atletico Madrid, who topped the standings. They are now seven points behind when their city rivals who have two games to spare.

Real Madrid objects to being Defeated by Levante