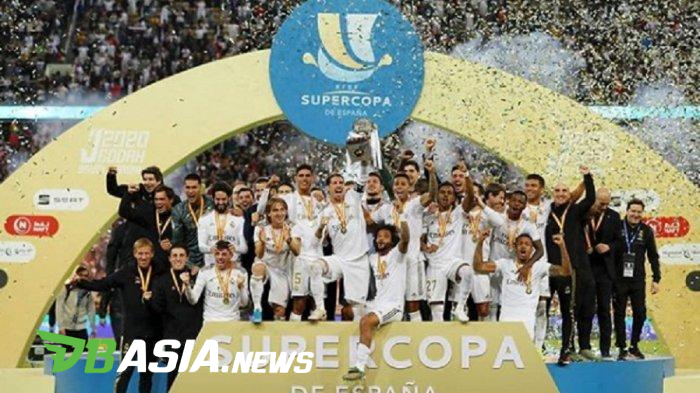 DBasia.news –  Real Madrid started the season well after successfully conquering Atletico with a score of 4-1 at the King Abdullah Sport City stadium, Saudi Arabia, Monday (1/13) AM.

While Diego Simeone’s Atletico Madrid went down in a 4-4-2 formation by relying on Joao Felix and Alvaro Morata on the front lines. From the start of the match Real Madrid had taken over the game with a dominance of possession of 66 percent compared to 34 percent.

Atletico, typical of Simeone’s playing style, did survive more. But their counterattack continued to pose a threat to Real Madrid’s defense. Both teams created many chances in the first half and was unable to finish with a single goal.

Thibaut Courtois and Jan Oblak, goalkeepers of the two teams, were forced to make a number of saves from the opportunities created by Joao Felix and Casemiro. The first half ended goalless.

Even so in the second round. Real Madrid were frustrated through the tightness of Atletico’s defense. Not to mention the heroic appearance of Jan Oblak when guarding the net. The match continued until the extra round.

The drama took place in the extra round as Madrid had to play with 10 players when Valverde dropped Morata in the 115th minute. Valverde performed a professional foul as Morata had ran past the defense and was one on one with Courtois.

Who would have thought Valverde’s decision was right as Atletico was unable to score with the advantage of the players they had. In fact, in the shootout, Real Madrid won 4-1 after two Atletico penalty executors, Thomas Partey and Saul Niguez, failed to score.

Real Madrid won the Spanish Super Cup and the magical final of Zinedine Zidane still worked well or was effective. According to Squawka’s notes, Zidane has now won every final match when he coached Madrid from the first to the second period.